This weekend three of elephant communications team went to Trier Germany to support Elephant Parade during the finale of its Parade in Luxemburg and Trier. More than 500,000 Euros were raised for the Asian Elephant Foundation.

Speaking after the gala auction event last night, Joris Linders, Elephant Parade Managing Director said: “The atmosphere was buzzing last night from the moment everyone took their seats. The Trier elephants looked spectacular around the room, each awaiting news on a new home. The auction results were a perfect way to close this exposition and the vibrancy and energy of the art was matched by people’s reaction to it - from children on the streets of Trier during the exposition to the auction bidders at last night’s event. This year has been a year of many firsts for Elephant Parade – our first visits to Luxemburg and Trier, our west coast debut in the US, taking Elephant Parade to new continent, and our first ever 14-stop national tour which is currently live in the UK.”

elephant communications has set the date for its first free advice day of 2014 for small businesses and this year's sessions will adopt a new thematic format.

Cardiff wakes up to an invasion of elephants 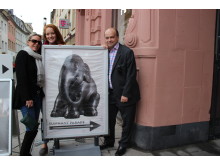