It’s almost five months since new rules were introduced to make it easier to switch bank in seven days. New elephant research reveals that just over one in five adults is planning or considering the idea of switching their bank in the next 12 months.

Compared to research run last September, the amount of people firmly saying they had no plans to change their bank has fallen from 73% to 67%.

These are preliminary findings from a forthcoming report from elephant communications, out in March, that explores consumer attitudes to the financial services sector, their appetite for change, the factors that matter and what they think a good organisation looks like. The report will draw on five separate pieces of research conducted over the last 12-months.

To register for more information on the forthcoming report, contact the team through the elephant newsroom or website www.elephantcommunications.co.uk

Around one in five adults like the idea of buying property to rent out in the future, according to new YouGov research for elephant communications.

elephant communications has set the date for its first free advice day of 2014 for small businesses and this year's sessions will adopt a new thematic format. 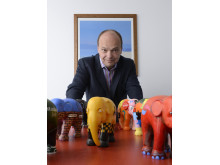